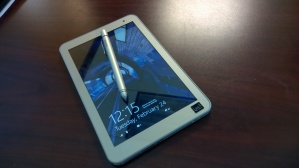 I’ve been using the TEW2 (Toshiba Encore Write 2) for about a month now, I bought it the day it was announced at CES from the Microsoft Online store. I have kind of a fixation on pen/tablet PC’s that goes back to the Newton. I like to doodle, draw, take handwritten notes and sketch diagrams–I guess I just tend to think visually and that helps me. So I’ve had just about every kind of tablet PC with a stylus/pen there is. Some examples:

Then a long, sorry drought descended as the world decided we didn’t need tablets or pens. I used paper. There was that momentary flash of desire when the Courier rumors abound, but that got killed. Then again the Surface Mini rumors. Killed again. Samsung Note series? Meh. I don’t really like Android and the ‘feel’ was just wrong on the tablets and phones. My iPad with a capacitive stylus? Terrible. Great fun consumption device, not suited for any kind of work.

My ideal was always a digital pad of paper–connected to everything I do, cataloging my thoughts as I had them. A true companion device. I decided the practical size was really around 8″, with a ‘real’ pen, good weight, solid, active digitizer. Strangely this was the goal of the very first device I tried, the Newton. It was indeed ahead of it’s time. I used a Surface Pro 1 & 2 with the pen, trying to make this the device of my long term dreams. Both are great PCs, but they are not the digital companion device I wanted. They’re fantastic tablets but just too big. Same with Surface Pro 3–although I may break down and get one of those soon. But it’s big, for big things and big apps. I wanted a ‘grab and go’ machine that ties into all my data and devices without the need for a whole PC.

I think I found it now. The TEW2 is just about perfect for my hardware needs in this space. It’s light (enough), good heavy feel pen, active digitizer, nice screen, fast (enough), nicely spec’d with 64GB storage, and all around great 8″ Windows tablet. And that pen! Oh the pen! It’s really good. It makes OneNote truly a useful tool, syncs my data and notes to the cloud and various other machines, and serves as my digital pad of paper. It’s a fantastic device and worth every penny of the $349 (a bit high for a Windows tablet, but totally worth it). This device is my main driver when away from my desk. I take notes in meetings, use it ask a sketchpad, doodle at my desk, even use it to take notes on phone calls sitting with right in front of my main desktop. It’s great and if you’re a pen fan, go get one RIGHT NOW!

So what needs to be done to make this even more useful? Software. Apps. Again. Windows has excellent pen support in minor ways for pen, but this needs a lot of development. Software and apps need to be written for the pen user to make it a true digital assistant. Someone should go back and look at those Courier concept videos for ideas. Here’s what I’d love in the short term for apps:

So the Toshiba Encore Write 2 is about the best I’ve tried so far in my long quest for the perfect digital paper. It’s a great device that I think represents a new breed of devices with pens. Hopefully with the success of the Surface Pro 3 we’ll start seeing more pen-optimized apps that do more. And for those that have never really ‘got’ the pen experience, I would say give it another try–the OneNote/Pen combo is pretty powerful.

[Post Note: 2/25/15: The version tested here is the Microsoft Store Signature Edition version. As our industry is at Peak Crapware this is recommended.